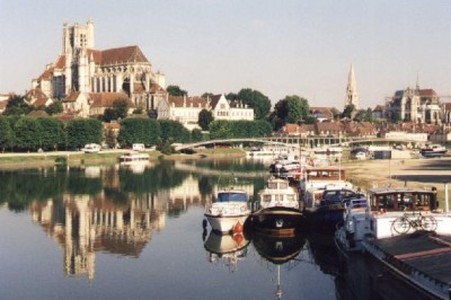 ​The Port du Plaisance at Auxerre, where Donjeux is currently based, is at the confluence of the River Yonne and the Canal du Nivernais, in the Burgundy region. The boatyard has toilets, rubbish disposal, car parking, showers, washing machine and free WiFi internet access. A well stocked supermarket is only a few minutes walk away.


Auxerre (pronounced 'oh-ZAIR') is a pretty riverside town with characterful squares, narrow lanes and half-timbered houses. The best place to admire its beauty is from the river where you'll see church spires and belfries rise above the rooftops. Probably the most impressive of the religious buildings is the Gothic Cathedrale St-Etienne which was built spanning a period of three centuries.   The cathedral is not quite finished yet (but what's the rush?)  but has some of the best known stained glass windows in France, and a fascinating crypt where you can see remains of the earlier cathedral on the same site. The Abbey of St Germain at Auxerre is also interesting, above all for the frescoes it contains, and a well known crypt.

But Auxerre is much more than just crypts and churches - the town itself has a great deal to offer as you explore. Much of the old centre of the town is now a region of protected development. There are lots of attractive squares where you can take a rest in a cafe, joined by narrow medieval streets and a myriad of attractive ancient houses.

​Auxerre is also famed for its first-class football team and is a convenient base for discovering the famous wine-growing area of Chablis plus the delightful medieval towns of Pontigny and Tonnere.

On leaving the Channel Tunnel terminus or the ferry terminal, follow the signs for the A26 to REIMS. This is a toll motorway.
Keep following A26 for REIMS. (The signs offer a variety of destinations that change along the route, but REIMS is common to all of them).
Eventually you’ll come to a peage.
Now it gets a bit confusing as you follow a ring road around REIMS. Follow signs for LYONS as the A26 becomes the A4 (ring road) and then returns to being the A26 again. Don’t turn off the A4 as you pass around REIMS.
Where the motorway appears to divide and you get back onto the A26 again, continue to follow signs for LYONS and then TROYES. You then come to another peage where you collect a ticket. Keep following signs for TROYES.
Stay on the A26 to the very end, ignoring exits that would take you into TROYES itself. Then take the A5 to AUXERRE and SENS.
Shortly after joining the A5, leave it at junction 21 signposted TROYES CENTRE, and AUXERRE, and arrive at a peage.
At the next roundabout, take the third exit signposted N71 for TROYES.
At the next roundabout, take the second exit signposted for SENS and AUXERRE.
At the next roundabout, take the third exit signposted N77 for AUXERRE
Stay on the N77 to AUXERRE, passing through a number of villages on the way. At the village of ARCHIES you can see the cathedral at AUXERRE in the distance. This is the first and last time that you see it until you are in the centre of AUXERRE.
At the next roundabout, pass under a bridge over the roundabout, and take the third exit signposted for AUXERRE CENTRE. This takes you through an industrial area. Keep following signs for CENTRE VILLE. Eventually, you cross over the River Yonne (The cathedral is to your right). Turn immediately right at the far end of the bridge and drive alongside the river. At the next traffic lights, turn right again and cross back over the river. On the far side of this bridge, bear right, and then take the first right signposted PORT DE PLAISANCE. This brings you to the riverside again, with the entrance to the “boatyard” straight ahead (off to the right of the road as it bends left) through wire gates (that are never locked).  As you drive alongside the water, you see a circular building on your left marked “INFORMATIONS”.
Powered by